Seahawks wide receiver Cade Roberts broke the state record for career receptions in the matchup. He had 245 heading into it and needed eight to beat the record of 252, set in 2017 by a player in Venice, Florida.

Roberts beat the record and then some, and he’s not done yet as the Seahawks still have the playoffs as well. 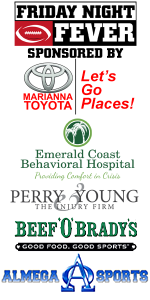 BCSO in need of volunteers for Project 25 shopping night

Chris Cuomo was accused of harassment days before CNN firing